Help! I seem to have a UFO!

Can anyone help me? I have discovered a UFO (Unidentified Flowering Object) in a pot outside my greenhouse.

Yesterday I decided to pay attention to my mantra “a tidy greenhouse is a happy greenhouse”, and set about pulling out weeds (including a pak choi plant!) which had started growing in between the slabs and having a general tidy. At the greenhouse door was a variety of pots into which cuttings and seeds had been thrown and left to do their thing.

However, having managed to identify what might actually be a plant and what was definitely a weed, I came across this little fellow. 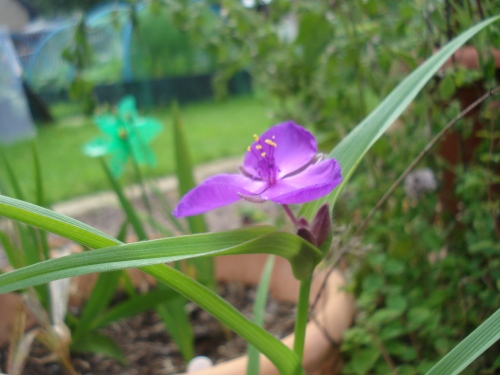 I quizzed Mr Mac about it but he drew a blank. We have no idea what it is or how it might have got into a pot outside the greenhouse.

It looks like grass but with a beautiful purple flower.

Apologies for the lack of focus. My camera was in a huff for some reason.

Mr Mac is convinced it is a rare wild orchid. Can anyone shed any light on what it might be?

This entry was posted in Flowers and tagged nature, plants. Bookmark the permalink.