For some reason this year I have been putting off getting started with anything, mainly due to the weather but partly because I know once it starts it is going to be non-stop until next winter! However, I had a word with myself and took a big deep breath……

Last Sunday I planted some flower seeds and sat them on a tray in the dining room covered with a plastic cloche (for paw protection!). Within 2 days the Malva seeds have germinated, closely followed by the Cosmos Purity. 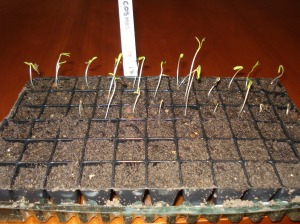 Out in the greenhouse, the lettuce leaf seeds I planted two weeks ago have now germinated but no sign of the peas yet. The garlic is now ready to be planted outside but it will probably be a few weeks before we will be able to do that as the ground is still covered in snow and will be too hard to plant.

Today we finally planted the First Early potatoes. We bought them weeks ago and they have been lying in the garage in the dark, not on a sunny windowsill to chit! However, no harm done and plenty of growth on each seed potato.

We decided to go for the same variety as last year called “Foremost”. Last year we grew them in tubs inside the greenhouse and the yield was superb. They were perfect for salads and we were eating them between June and August. Due to the main crop potatoes suffering from blight last year, these were the only potatoes we had! 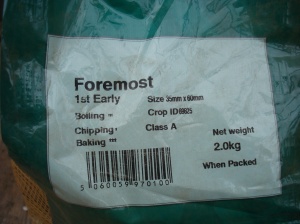 We have planted some in tubs again but also put some in compost bags. Enough soil to bury the seed potatoes and then just wait for them start growing and keep covering them with soil. 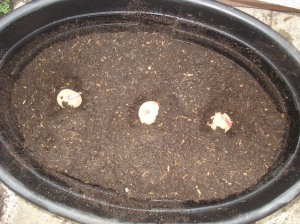 A few weeks ago our garden got trashed by sheep that escaped from the field next door. They took a fancy to my winter flowering pansies and ate the lot. I had grown them from seed since June 2012 so I was devastated. It also left me with lots of empty pots, too late to plant spring bulbs and too early for summer bedding.

However, a trip to the garden centre to see what I could replace them with led me to the bargain of the year so far. In a quiet little corner where the bargain bucket is we found trays of primulas reduced to 75p for six. So we bought all of them.

Then we saw a pile of terracotta pots, originally £15 but reduced, then reduced again to only £2.99! So we bought nine of them!

So after a little bit of dead-heading we now have three little pots of sunshine on our doorstep. Bah humbug and mint sauce!

The more alert among you may have noticed that we are approximately two-thirds of the way through March. However, I have two excuses. The first is that the Central belt of Scotland is at least a fortnight behind the south of England when it comes to all matters of the garden variety and the second is…..IT IS STILL SNOWING!!!!!!

The snowdrops have now “dropped” and the daffodils, tulips, crocus and hellebores are thinking WTF? I did manage to tidy my brassicas and start planting some seeds  but other than wandering aimlessly around the garden, wrapped up like the Michelin man and leaning at a jaunty angle into the wind….not much has been happening.

So here is what should be happening this month…

Last year for the first time I planted purple sprouting brocolli and I believe it should be ready about now. However, while they have started to grow, they are still only about 15-20cm high. I am not sure what to expect so if anyone can enlighten me it would be greatly appreciated.

My leeks are doing well. They have taken a growth spurt in the last few weeks and should be on their way to the soup pot very soon! 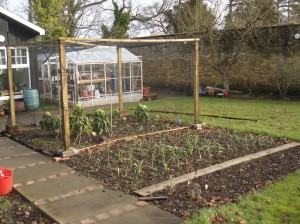 Today happens to be the Spring Equinox, the day when day and night are equal and from here on we will be bathed in sunlight. I can’t help but be an optimist and sense that all this late snow means we are in for a long, hot summer…..bring it on!

Posted in General, Hints and tips

Ficus carica…..or figs to you and me!

When we built the conservatory greenhouse, Mr Mac wanted to plant some form of permanent fruit tree inside it that would be able to grow up the wall. He wanted something unusual that would not grow outside but would thrive in the Mediterranean type climate created inside. For a year now we have hummed and hawed about what would be best, the three main contenders being grapes, peaches and figs.

We ruled out peaches because our next door neighbour has a peach tree in his greenhouse and we can always snaffle some of his peaches when he is out playing golf or on a golfing holiday (John likes golf…..can you tell?). So it was down to grapes and figs and another winter of procrastination. Mr Mac and I are not quick at making decisions.

However, when we were on holiday in Italy last year we discovered just how fantastic fresh figs picked from a tree could be and so the decision was made….a fig tree would be purchased.

A few weeks ago I started to do some research. It appears that there are two types of fig which will do well in the UK climate. The one we decided to purchase was Brown Turkey, being heralded as the most reliable fig for the UK climate which produces a heavy crop of purple-brown fruits from late August to mid-September…perfect!

Thinking we would have to order it online can you imagine our delight when a chance remark at the garden centre led us to being shown two specimens of Brown Turkey and a deal was done. We chose the more established plant which was also fan trained, exactly what we needed for training it up the wall and it had two shrivelled up figs….proof that it had a track record of producing fruit.

Planting it was easy, we just watered it well, dug a hole to accommodate it, added some compost and fertiliser and popped it in. So far so good.

Mr Mac has also done his sums and on the basis that Sainsbury’s sell figs at £1.99 for three, he has calculated that once we have had 60 figs from our tree it will have paid for itself!

Hopefully it should not require much maintenance, simply a spring feed, mulch and regular watering throughout the growing season. I read a lot about needing to restrict root growth to make sure it fruits well rather than growing large and leafy. It is recommended to plant it in a container or line the planting hole with bricks, rubble or concrete slabs. The alternative is to train it it on a wall and prune it to fit the required space….this is our plan so fingers crossed!

The helpful lady at the garden centre also suggested that in order to help the fruits ripen, put a heater in the greenhouse. Watch this space.