The best tomato pasta in the world!

In any normal year, come August and September, Mr Mac and I usually take on an orange glow due to the amount of tomatoes we eat. Our staple diet is usually this simple pasta dish which originally came about as we had to find ways to use up all the tomatoes.

This year it was 21 September before we ate it for the first time and I have been waiting all summer to share it with you!

It takes minutes to prepare and you can leave it in the oven for an hour and go potter in the garden.

We have tried adding garlic but I think this makes it bitter. Chorizo works well cut into small cubes and also using chilli oil instead of olive oil adds a nice bit of heat. However, I believe the tomatoes are always the star of the meal and this is definitely a case of less is more.

I have had a bumper year for peas. I decided to stick to petit pois and went for a variety called Calibra. I was promised disease resistant high yields and I was not disappointed.

I experimented by starting early and growing a crop in a large pot inside the greenhouse. I planted the seeds on 19 February and we started eating the first peas on 23 June.

By comparison I planted seeds outside on 27 April and have been eating them from early August. Doing it this way has meant a continuous supply of little green gems right through summer.

I would have had even more but I planted some mange tout beside the peas and got carried away when the first pods appeared. After forcing Mr Mac to eat very stringy “mange tout”, I realised one day while weeding that we had been eating the pea pods NOT the mange tout…..oops! One day I will practice what I preach and label things!

Over the two batches I  also managed to freeze some. When shelling them, I was reminded of the old Birds Eye frozen pea advert from my childhood, with the slogan “one hour to frozen”. Apparently this slogan was subtly dropped as the real time had crept up to 2 and a half hours!

I managed from bottom of the garden to freezer bag in less than 12 minutes – beat that Captain Birdseye!

This summer’s soggy weather obviously suited the soft fruit because we have had bumper yields. Over the last few weeks Mr Mac collected and froze almost 15lbs of raspberries.

After our third batch of making plain old raspberry jam I decided we should try something different. I remembered tasting raspberry and amaretto jam somewhere…I think it was at a craft fair or farmers market…and so we decided to use the last of the raspberries to experiment. The result is delicious.

Five cherries do not a cherry pie make

After a promising start we had loads of blossom. 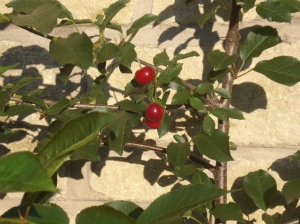 …after the birds got their share, this is the sum total of our cherry harvest…