Purple Sprouting Broccoli…was it worth it?

I have had limited success these last few years growing broccoli. I have lovely tall strong plants but the florets flower almost immediately meaning there is little left to eat. Having read up on the subject I think my mistake has been to leave the florets thinking they will grow bigger and look like the ones on sale in the supermarket.

However, I have discovered that the spears should be cut as soon as they form and this encourages the side shoots. The more you cut, the larger the florets…..at least that is what I think is supposed to happen. I am still not sure.

Last year I decided to try growing purple sprouting broccoli. The seeds were sown on 8 June 2012 (basically 11 months ago). I planted them at the same time as the rest of the brassicas but was aware that it would be Spring before they did much.

Most of the plants did produce small purple heads and I waited and waited for something more to happen. In desperation at the weekend I decided to cut the heads of to see if it encouraged the side shoots to sprout and it has had limited success. I think this together with a combination of warm sunny weather has caused two plants to grow and the rest to produce side shoots.

However, they are still only about 9 inches high and are not producing nearly enough to justify taking up one third of my veggie plot after having spent the best part of year doing so.

I have no idea what I am doing wrong but I’m really frustrated as I love broccoli and really want to grow it successfully. 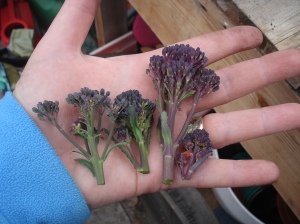 My first crop of heads

My second crop of side shoots.

In their defence, none of my brassicas did particularly well last year, probably due to the wet weather. The cabbages never grew more than tennis ball size, the cauliflowers went to seed immediately and there were barely enough brussels sprouts for xmas dinner!

So being the eternal optimist I will give them the benefit of the doubt and try one more time. You never know, this time next year I may be blogging about a broccoli glut and posting recipes for broccoli brownies!

Mr Mac is itching to get this plot rotivated and I have to admit I really need to get my carrots and parsnips in the ground soon. So the purple sprouting broccoli have a stay of execution until the weekend and then its off to the compost and time to start again.

If anyone has any hints or tips I would love to hear from you!

The more alert among you may have noticed that we are approximately two-thirds of the way through March. However, I have two excuses. The first is that the Central belt of Scotland is at least a fortnight behind the south of England when it comes to all matters of the garden variety and the second is…..IT IS STILL SNOWING!!!!!!

The snowdrops have now “dropped” and the daffodils, tulips, crocus and hellebores are thinking WTF? I did manage to tidy my brassicas and start planting some seeds  but other than wandering aimlessly around the garden, wrapped up like the Michelin man and leaning at a jaunty angle into the wind….not much has been happening.

So here is what should be happening this month…

Last year for the first time I planted purple sprouting brocolli and I believe it should be ready about now. However, while they have started to grow, they are still only about 15-20cm high. I am not sure what to expect so if anyone can enlighten me it would be greatly appreciated.

My leeks are doing well. They have taken a growth spurt in the last few weeks and should be on their way to the soup pot very soon!

Today happens to be the Spring Equinox, the day when day and night are equal and from here on we will be bathed in sunlight. I can’t help but be an optimist and sense that all this late snow means we are in for a long, hot summer…..bring it on!

Posted in General, Hints and tips

What a difference a day makes……

So sang Dinah Washington, The Temptations, Jamie Cullum, Tony Bennett and all day yesterday, me!

Yes the sun was shining and I embarked on my flower planting marathon which will continue all weekend and probably well into next week. I am keeping a note of how many of each flower I am planting and I think you will all be truly impressed!

However, the reason I am blogging about a day making a difference is that my Jekyll and Hyde personalities (ie my legal brain and my common sense brain) have been wrestling with each other this week about, would you believe, the timing of sowing seeds.

I was passing the garden centre on Wednesday (30 May) and popped in to check there was nothing else I could grow this summer and also to pick up some winter flowering pansy seeds which I read should be sown around now.

I have been reading lots of other gardening blogs and recently many people were talking about harvesting purple sprouting broccoli which had been over-wintered. I thought I would give it a try and looked for the seeds. There were lots to choose from but when reading the instructions a common theme was developing… “sow April to May”. That only left me one more day!

You see this is where my mental tussle began. To my legal brain, used to 20 years of sticking to time limits and deadlines, I only had until midnight on 31 May to sow these seeds.

Thursday 31 May dawned.  It was so wet, even the slugs had umbrellas. I checked the weather forecast. It was due to dry up around 4pm. Perfect, still plenty of time. 4pm came and went and it was still torrential, getting even heavier.  The fire, the lights and the television went on. I kept wandering over to the window and gazing out. No change.

Eventually, Mr Mac asked what was wrong with me. I told him I only had until midnight to sow my purple sprouting broccoli seeds. As soon as the words were out of my mouth I realised how totally stupid they sounded. My legal brain had clocked off for the evening and common sense brain was on the backshift – they just hadn’t told me.

Anyway, I can’t publish Mr Mac’s response but it was along the lines of “don’t be so silly, darling, one more day won’t make a difference”. This is from the man who believes sell by dates are a conspiracy and is often heard muttering at an open fridge, “it says ‘best before’, not ‘will kill you’ after”.

So yesterday, Friday 1 June was a beautiful sunny day and guess what? I still didn’t sow my purple sprouting broccoli seeds. I was so busy trying to catch up with flower planting I did not get round to it. Why do today what you can put off until tomorrow? (That’s the Irish side of my family!).

Then this morning my copy of Amateur Gardening magazine arrived and I eagerly ripped it open to see what free seeds were included (schizanthus, in case you’re interested) and what I should be doing this week. I turned to page 40 to read all about the free seeds and was horrified to read the following:

“Plants from a March sowing can be in flower as early as late May, but, of course, we’re into June now and we’ve missed the sowing deadline for summer flowers this year”.