Well what a week it has been. I spent most of the time doing the greenhouse hokey kokey…in, out, in, out, have a cup of tea…trying to dodge the showers.

It was time to turn the compost for the first time since creating the new bays. I timed Mr Mac and it took just over 30 minutes. A huge improvement on 2 years! He just used a fork and lifted the compost over into the empty bay. I ripped up some cardboard and threw it in too to add some carbon. I have also learned that adding cardboard can also stop the compost heap smelling! We shall see….

The middle bay was full and ready to be turned into the bay on the right. 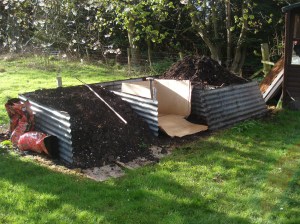 All of the new waste is now on the bottom and lots of air has been introduced to help it break down quicker.

And the not so good news…

The pigeons got the blame for eating the chard and the tulips. However, we then noticed the rasberry canes had all been stripped of shoots and leaves up to a height of about 3 feet. There is no way pigeons could have done that. Perplexed, we spent the day building frames to support nets over the raspberries and at 5am the following morning, Mr Mac got up before any of the birds, set a trap and sat at the back door Elmer Fudd style…waiting.

Do you know what it was?

It was the pheasant! He has been wandering around for a few weeks now but we had never seen him in the garden. He makes a very loud “caw, caw” noise, followed by flapping his wings so you can hear him, even if you can’t see him.

One morning he woke us up and I even joked that he was so loud it sounded as if he was at the bottom of the bed! That was probably the same morning he ate all the tulips!

Fear not! He is still alive and well but we are following his movements closely and if he comes anywhere near the garden he gets chased away.

We are still not convinced the pigeons are entirely without blame for all the damage. I watched a programme recently about the London Underground. They have so much bother from pigeons at depots and stations that they employ a hawk which scares away the pigeons.

I half joked to Mr Mac that perhaps we should get a hawk to scare away the pigeons. He told me I was a genius and went next door to see Wallace. His real name is John but I call him Wallace because he was the inspiration for Wallace and Gromit. He is always designing gadgets from bits and pieces lying around.

Anyway, this is what they came up with…

He is made from plywood and is attached to a bendy bit of metal so he “wobbles” in the wind.  Wallace is currently designing some form of swivel mechanism.

Apparently, a second decoy was also produced but he looks more like tweety pie!