Where has my Muscari gone?

I popped into town this morning to buy a paper. I also did my good deed for the day and donated leftover balls of wool to the Cat Rescue Appeal – apparently so volunteers can knit blankets for the abandonned kittens – awwwwww.

Anyway, on my way home I was stopped at the traffic lights at the canal bridge. I don’t mind this as there is a house there which always has a great garden. Whoever it belongs to is always one step ahead of mother nature. The snowdrops have been and gone, crocus are in the death throes, daffodils and tulips have been out for ages.

I was having a good old nosey while waiting for the lights to change when I noticed something new – Muscari! I thought to myself, ” I planted some of that. Where on earth is it?” 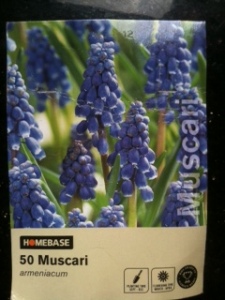 As soon as I got home I looked out the label. Beautiful blue flowers. Something to give the garden a bit of colour while it is waiting for everything else to come out of hibernation. A bit of blue contrast to all the yellow daffs. Good for wildlife too, apparently. Look great alongside early tulips according to the label. YES BUT WHERE ARE THEY??????????

According to the instructions, flowering time is March to April. Not the end of the world, there is still time. I checked my garden log and they were planted on 16 January – slightly later than the recommended September to December planting time but barely over a fortnight. How come “Mr. House at the Canal Bridge” is so far ahead again?

According to the label there were 50 bulbs. Now I have a confession to make. I have been round the garden looking for signs of life and I cannot actually remember where I planted them!

So I will keep waiting and looking and if they ever appear you will be the first to know. And from now on I am going to use my marker labels religiously so that this never happens again.

Tomorrow I might walk into town so I can have a proper look at “Mr. House at the Canal Bridge’s” muscari………

This entry was posted in Flowers. Bookmark the permalink.

One response to “Where has my Muscari gone?”