Well I can’t believe it is February already and we have been blessed with another sunny weekend which meant lots of gardening jobs got done. Mostly weeding and tidying but I’m feeling quite smug now! The garden is starting to transform – check out my other blog at http://www.ayearinmygarden2013.com for a weekly photographic record.

I’ve been reading up on what gardeners should be doing in February and here are the main jobs:

I still have not done January’s job of sorting out my seeds, seeing what I need to order and make a plan for the garden for this year but it is too early for me anyway. I don’t want to make the same mistake I made last year by sowing tomato and flower seeds in mid-February and then losing them all to frost in April. That set me back 7 weeks but everything caught up in the end.

I have done lots of weeding, mulching and dead-heading so don’t feel too bad and the garlic was planted last weekend.

Having researched what type of garlic to buy I decided hardneck types would be better for the Scottish climate. They are more hardy than their softneck cousins and thrive in the UK, especially in northern areas. The only down side is they do not store as well – not an issue in our house as we eat it all the time.

However, when I went to the garden centre the packaging gave no indication of whether the variety was hardneck or softneck so we opted for Solent Wight which is produced in the UK and Arno, a French variety. 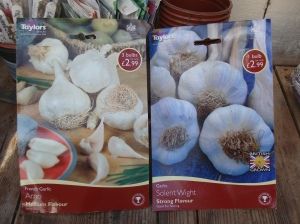 We split up the bulbs and planted each clove of the Solent Wight in individual pots so it can be planted outside later in the spring. As Arno is used to the French climate we opted to grow that in one of the beds inside the greenhouse. 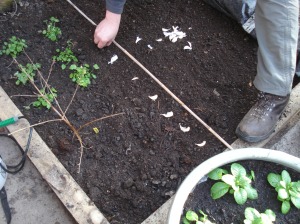 It is the first time we have tried growing garlic so fingers crossed!

Posted in Hints and tips, Vegetables

Best of friends – a quick guide to companion planting

My seedlings are all coming along nicely…they just need a bit more sunshine!

As well as my usual veg I have also planted loads of French marigold and sweet basil seeds to act as “companion plants”. I can’t remember where I first came across companion planting, but when I sat down to write this blog I checked my gardening books to see if I could pick up any interesting information or tips and was amazed at how little is actually written about this subject.

The internet is different, with everyone and their dog having an opinion about what is best. At the end of the day it all boils down to what you grow and where you live.

Companion planting is when you grow two or more types of plant closely together for mutual benefit.  There is a lot of talk about it being an organic method of pest control. I am not trying to be organic and would use chemicals as a last resort but as I am growing most of the “companions” anyway, why not just plant them where they will benefit another plant?

Most companion plants are strongly scented and confuse pests looking for their host plant. Others attract beneficial insects, such as ladybirds and lacewings, which prey on aphids. Some attract pollinators, like bees.

As I mentioned above, I grow marigolds and basil – these are my top 2 companion plants. I must admit I am not that keen on marigolds or their smell. I have flashbacks to the 1970s and tidy gardens edged with marigolds – the height of sophistication at the time! However, if you look at any list of suitable companions, marigolds appear the most.

I keep loads in the greenhouse and also plant them among my veg. The smell repels many insects. They also attract aphid eating hoverflies and keep whitefly away from tomatoes.

As for the basil I plant this between all my tomato plants as it is supposed to keep whitefly away. It is also perfect for picking at the same time as tomatoes for that classic combination! I have also learned that the shade provided by the tomato plants helps to stop the basil going to seed.

Other top companions to try:

The combinations are endless and it depends what you are growing and what works for you. Last year my friend simply planted garlic beside everything she grew. This year, as well as the marigolds and basil, I am going to plant lavender among my leeks and sage between my brassicas.  It may all be an old wives tale but what is the worst that can happen?

Fingers crossed for a pest-free season!

Posted in Hints and tips

A little bit about herbs

Herb trough looking sorry for itself

Last year Mr Mac made me a herb trough from some old scaffolding boards he acquired. I painted it with some fence paint and planted lemon and golden thyme, marjoram, rosemary, parsley and chives.

I have just cleaned out the old leaves and twigs and given all the plants a tidy. I seem to have lost the marjoram though – it’s gone. The rest look quite woody and straggly but there is definitely new growth so hopefully they will all come back. 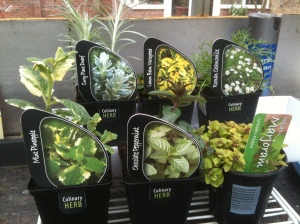 – curry plant, lemon balm, roman chamomile, mint pineapple, chocolate peppermint and marjoram to replace the one I lost. Six plants for £9 plus Dougal’s 10% discount – a bargain!

I also grow ordinary mint but keep this in its own pot as it is very invasive. I have planted sweet basil and lemon basil seeds which I use for both cooking and as companion plants for the tomatoes and I might try growing coriander from seed – I am still thinking about it.

A funny story about coriander

A friend of Mr Mac’s brought us some chilli plants and herbs last year, one of which was coriander. Neither Mr Mac or myself are big fans of coriander (due to an incident in Goa in 1994!) but it was a gift and it seemed to grow quite happily in the greenhouse. Eventually I felt compelled to do something with it and as I had loads of carrots ready I decided on the old standard, carrot and coriander soup.

At the time we had a heating engineer working on the stove in the kitchen and he fancied himself as a bit of a chef.  I asked him what he thought and where I was going wrong. He had a taste of the coriander and promptly killed himself laughing.The reason I could not taste the coriander was because it was flat-leaf parsley! The soup was still lovely, although very well garnished.

Last year I tried growing  lavender from seed. The lavender was successful and it even flowered at the end of the summer. I had plans for a lavender hedge beside the deck where we sit on sunny evenings but I was so precious about planting it out and losing it over the winter that I left it in the greenhouse. Mr Mac covered it all in straw to protect it and it seems to have survived.

Fortunately, this week’s issue of Amateur Gardening magazine has a section on pruning shrubs. Apparently the lavender should have been pruned after it flowered last summer. This allows time to develop new shoots which will carry buds for this year’s flowers.

It does say that any old, dead flowering stems should be cut out but not to cut into old wood. This is where I get confused and I do not know what that means. Some of my plants look as if they are dead. Others are partly dead but with lots of new leaves and a couple are full of new growth. I can’t work out what is “old wood” and “new wood” though.

Here is what they looked like before and after! 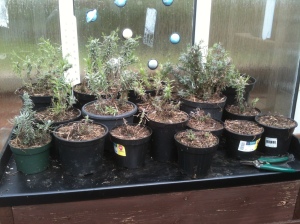